One Hundred Years of Walking


The first picture below shows how Petroleo opened the embrace, and began to take large forward steps… but he is still hunched forward a bit, in the old style. The next picture shows Todaro. He has straightened up, and moved his shoulders back. He stands in the more upright posture used by modern stage dancers. The best stage performers today stay up, centered, and often separated, which gives them the balance and space necessary for athletic stage moves: 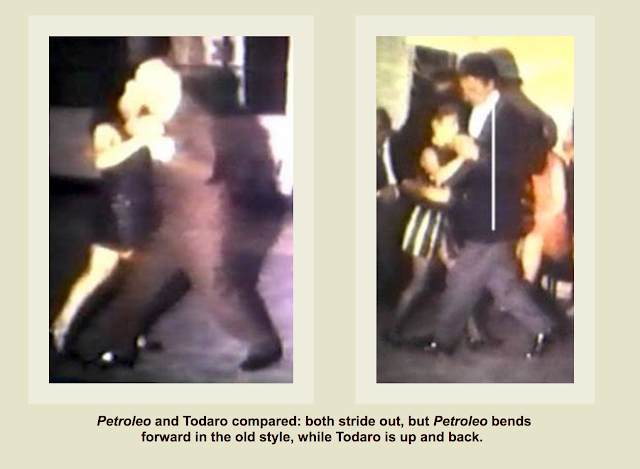 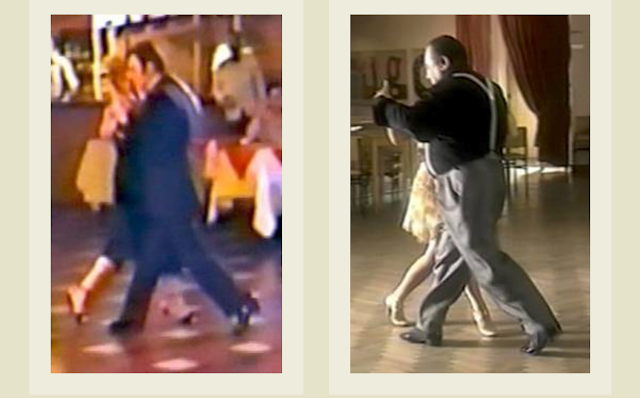 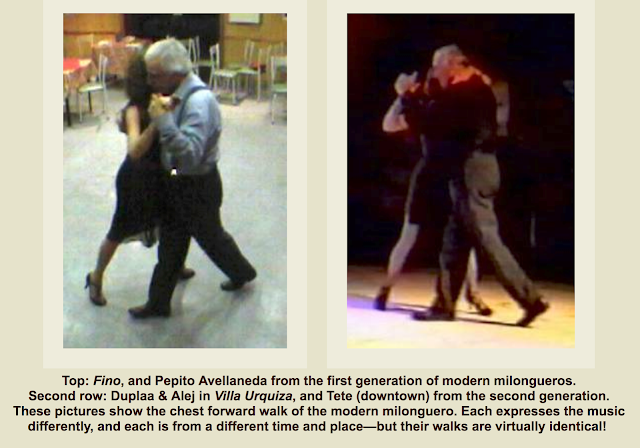 The four pictures above are a textbook study of good modern social tango. They represent different barrios, different dancing styles, and even different generations—but they are identical! These milongueros have all of the characteristics that we discussed in the “Secrets of the Milongueros” section. Each one stands tall, leads with the chest, and steps with all of his weight onto a straight leg. Did it all begin with Fino? I think it probably did.

Closer and Closer
The evolution of the embrace

The predominant dancing style in the milongas today is a moving, close embrace style, punctuated with pauses for turns and figures. Even the most complex giros or figures are often done with little or no separation between the partners. This is more or less Alejandra’s and my style, but we don’t teach it or advocate it. We just find, like most people in BsAs today, that it’s the most comfortable and efficient way to dance in crowded milongas. The question is how did tango arrive at this style of close dancing? Let’s trace the evolution of one specific tango step to see what we can learn. The step is sometimes called an ocho cortado, or an inside ocho, where the man leads the woman’s left leg to step forward in front of him. Her leg must pass inside the dance frame, between the two partners, and she often finishes in a cross. Most beginners are probably exposed to it in their first few weeks of classes.
In the beginning, because the partners didn’t actually face each other, taking this step was very easy to do. In fact, most of the steps the woman took in the old style of embrace were “inside”, in the sense that both partners faced almost the same direction while dancing, so the woman’s left leg stepped along side the man, “inside” the embrace. But then Petroleo began dancing more face to face, and the step became more difficult. Here is how he did it: 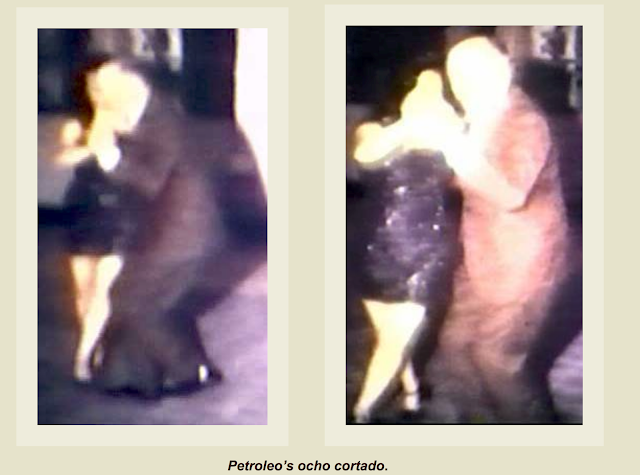 This step should be familiar to most tango dancers. It’s often taught today in the manner Petroleo is demonstrating: He moves his partner around to his right side, like in the old days, and then he brings her back in front, guiding her leg between them with his right arm. Notice that he bends forward to allow space for the woman’s leg to pass in front of him. The woman often finishes in front, facing him in a cross.
Now let’s look at Todaro: 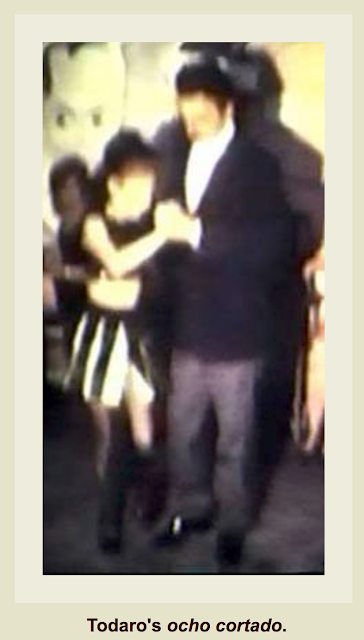 The picture above shows that Todaro is more upright than Petroleo. His legs are straight, so his knees are not blocking his partner’s path. By being up, he creates room for her to pass in front, without needing to bend forward at the waist. But this is still being done with both partners separated—there is some space between their bodies. Now let’s look the ocho cortado of the 21st century milonga: 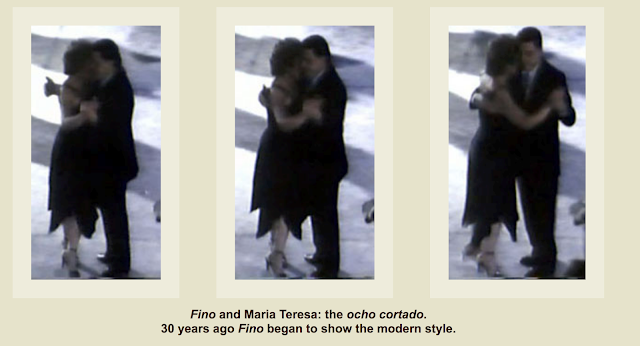 In the captures above, Fino and Maria Teresa’s posture and balance are the key. Fino’s chest is up and forward, his legs are straight, and his heels are together. Maria is also up, straight, and slightly forward. The result is that Maria’s leg can pass between them without the need for Fino to bend at the waist, or for the partners to step apart. Fino doesn’t have to move her over to his right side to begin because the lead is from the chest, and the space to take the step already exists. What a beautiful set of pictures.

4月 01, 2018
Fino (Continued) For me,  Fino  set the style for modern social tango in Buenos Aires. I know I’m basing it on thin evidence, because there were certainly other great dancers who were also influential, ( Milonguita , for instance, of whom I have no film at all). But in the “ Baile Nuestro ” movie, the other great dancers of that era are dancing at the milonga with him, (including Pachin and  La Gallega , Victor y  La Rusa , Sansiñena and Nelly, and Portalea), and he stands above them. If you spend a lot of time watching in milongas, you sometimes notice a couple that move in a special way.  Fino  and Maria Teresa have that aura. You instinctively feel that they are the couple everyone is watching. Fino displays the tall, forward surging step that the best milongueros use today, and a flowing way of expressing the music that sets him apart. I have never seen it anywhere else, in any earlier film or photographs. Here is Fino displaying the techniques of the very best milongueros tha
張貼留言
閱讀完整內容